‘Crematorium’ reads the old blue street sign in Eaglehawk, Victoria, and the child assumes there is a link to ice cream somehow. I explain the meaning. He is shocked. ‘What, burnt?’ he says. I briefly explain and then hurry past the grisly thoughts and images, and tell him instead about the significance of ashes to the game of cricket. Then later I decide to investigate the background to the famous urn of ashes that is housed at Lord’s. 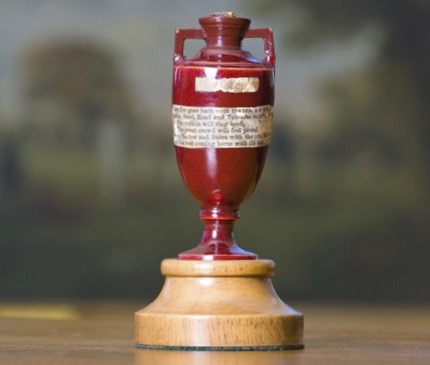 In the spring there are a few pale golden daffodils nodding in the grasses among which stand, here and there, the gravestones in the churchyard of St Mary Magdalene (see the image at the head of this page). Kind of romantic. This is Cobham in Kent, and the tower of the church is one of those severe square Norman ones in weathered grey stone. One grave is that of Ivo, 8th Earl of Darnley and his ‘loving and beloved’ wife Florence. When I was doing research for my 1995 novel The White Garden, I visited by chance the church in Cobham, but I confess I paid little attention to the headstones. I must further confess that my research for this essay comes mostly from the internet. So perhaps this is not an essay after all, but a piece of deeply unreliable fiction. It seems the grave of Ivo and Florence was restored in 2011. If I ever return to Cobham I will look at it. You might wonder why the earl and his lady are buried in the churchyard, and not in some more auspicious location. Well, it so happens that the last Earl of Darnley to be buried in Westminster Abbey was the third one, who died in 1781, after which there was apparently no room there for any more Earls of Darnley. So the family built an elaborate mausoleum in the grounds of Cobham manor house, but, as my sources tell me, ‘for obscure reasons’ nobody was ever laid there to rest. So there are Ivo and Florence in the graveyard of St Mary Magdalene. I do love and obscure reason.

Keep your eye on Florence, loving and beloved wife of Ivo.

I must now turn to the matter of cricket. Florence was a key player in the narrative about the ‘Ashes’ that are kept in an urn at Lord’s, and that have given their name to the cricket series between England and Australia. In 1882 after Australia defeated England at Lord’s, there was a mock obituary in the Sporting Times lamenting the death of English cricket, and saying that its body would be cremated and the ashes taken to Australia. Legend has it that a stump from the fatal match was burned, and that the ashes were sent to Australia. The destination of these ashes seems to remain unknown. Ivo captained the English team that subsequently played in Australia in 1882 – 83 and he said he would ‘bring back the Ashes’. So far, so much metaphor.

Ivo and the team sailed from England to Australia in the company of Sir William and Lady Clarke of Rupertswood, Sunbury, Sir William being President of the Melbourne Cricket Club. Now, on board was Florence Morphy, governess to the Clarke children. Florence was the daughter of the police magistrate at Beechworth, Victoria. Ivo and Florence fell in love and were married at St Mary’s in Sunbury in 1884. There’s a nice happy ending bang in the middle of the story.

But between the shipboard romance and the wedding, there was cricket. Before the tour began, on Christmas eve 1882, Sir William presented Ivo with a tiny urn. Was the urn silver? Was it terra cotta? What did it contain? Why ashes of course. But ashes of what? Stump, ball, bail or veil? Family legend insists they were the ashes of a veil belonging to Florence, burnt by Lady Clarke in a playful, romantic gesture. I can’t help thinking this was a weird thing to do, to burn the veil of the governess and pop them in an urn. But then, the Victorians were into memorial keepsakes. If Lady Clarke did burn the veil, she set the ball rolling for confusion ever after between ‘veil’ and ‘bail’. This confusion is perhaps compounded by the fact that after the English won the third game of the series Ivo took a bail from that match, had it made into a letter-opener, and presented it to Lady Clarke. Both the urn and the letter-opener remained at Rupertswood until Ivo came back later in 1883, and married Florence in 1884. He took the urn home to England and it now lives at Lord’s. It is made from terra cotta, and has returned to Australia only twice; the letter-opener is still in Australia.

The ultimate happy ending I suppose is embedded in the graveyard at St Mary Magdalene, Ivo having been buried there in 1927, and Florence in 1944. (Florence died on my fourth birthday – a seriously useless piece of trivia, but at least it is probably a fact.) I assume that it is the skeletons, not the ashes, of Ivo and Florence that lie in the graveyard with the daffodils. Together at last.

In a recent novel by Fay Weldon, Death of a She Devil, there are lots of old people living in an ancient lighthouse (don’t ask). When the 94 year-old man (the only man in the place) dies, there is much discussion of how to dispose of his body. Burial, cremation or something else such as liquefying him and pouring him into the sand. They do in fact crudely and illegally bury him, and he surfaces from time to time, being finally taken off to the morgue. His ultimate resting place is not recorded in the novel.

So, to bury? Or to cremate? To follow the blue street sign to the crematorium, or to meander off to the churchyard. Furnace or slow decay? Problem.

Recently a friend was saying that she and her family are thinking of taking her sister’s ashes to the sea, and scattering them in the waves not far from the old family home. Then she said she might take the ashes of her own late husband and daughter too, and scatter them, since what to do with them has never been decided. This set me off on a frequent train of thought of mine, which is that families often seem to have a problem knowing what to do with the ashes of the dead. Burial of a body is so routine and straightforward, in a way. You die, you are boxed, the box is buried, nature, merry with moisture and heat and cold, bacteria and critters, takes its course. You have a location in the graveyard. Ivo and Florence, for example, will ‘always’ be in place. Ashes in urns often lurk awkwardly about the house for years and years.

I sometimes recall the end of Wuthering Heights where Lockwood visited the graves of Edgar Linton, Cathy and Heathcliff. He: ‘lingered round them, under that benign sky: watched the moths fluttering among the heath and harebells, listened to the soft wind breathing through the grass, and wondered how anyone could ever imagine unquiet slumbers for the sleepers in that quiet earth.’

This kind of thing appeals to the romantic imagination, removing from the picture the busy and disquieting presence of a range of worms and insects, not to mention the effects of water, fungus, the interest of wild animals, bacteria and the general process of decay. But the romantic imagination is a long long way from reality; that is its function of course.

Some of my family and friends have been buried, and some have been cremated. Both are horrible. They are the two principal methods used today, although as the earth grows ever more crowded and betrayed, and as people become more urgently aware of the need to care for the planet, it is clear that both of these methods involve a most serious and dramatic waste of precious resources.

The characters in my most recent novel Family Skeleton are funeral directors, involved in making a fortune from burials and cremations. The narrator is a skeleton; a body languishes in a cellar unattended for five years; romantic gestures include releasing flocks of butterflies at funerals. There are various kinds of cemeteries in the book. Although nothing quite like the one in Wuthering Heights or the one at St Mary Magdalene. And I realise there is no discussion of cremation in my novel. It’s a burial kind of novel. Dead ad buried, buried alive.

I have no answers to the question of whether to donate the body to science, to bury, to cremate, to liquefy – or even to mummify. It’s clear that a dead body is a problem, whichever way you look at it. But now at least when I think of ashes I might think of Ivo and Florence and the ashes of the veil, the renovated grave, the empty mausoleum. It’s easy to slip from the horrors of that child’s question: ‘What, burnt?’ to the romance of moths fluttering among the heath and harebells.

Not to mention the mysterious romance of The Ashes.

4 thoughts on “ASHES TO ASHES – is it cricket?”