‘You’re not angry then?’

Her voice was almost steady, the empty martini glass quite still in her hand.

‘Thank God for that.’

The glass she held was, oddly enough, the one with the crack in it.

He introduced her to Rachel, who smiled a little nervously.

Her teeth were distinctly crooked. Didn’t everybody have orthodontistry these days?

‘Oh hello Sarah-Jane. I’ve been longing to meet you.’

Jeremy was staring out the window at the crowd down at the pool.

‘Oh, but whatever happened to your teeth?’

And as she said again ‘your teeth’, Sarah-Jane felt her hand curl slowly across the top of the glass. The thing cracked and splintered, shards of glass digging swiftly into Sarah-Jane’s palm, blood running along her arm, dripping down her soft apricot dress and disappearing into the pattern of the Persian rug. Without a word she turned around and walked out of the room, her head in the air, her hand still holding a broad fragment of the glass.

These are some of my memories of living in Tasmania during World War Two.

Image of my mother reading to Skete the dog in 1942. 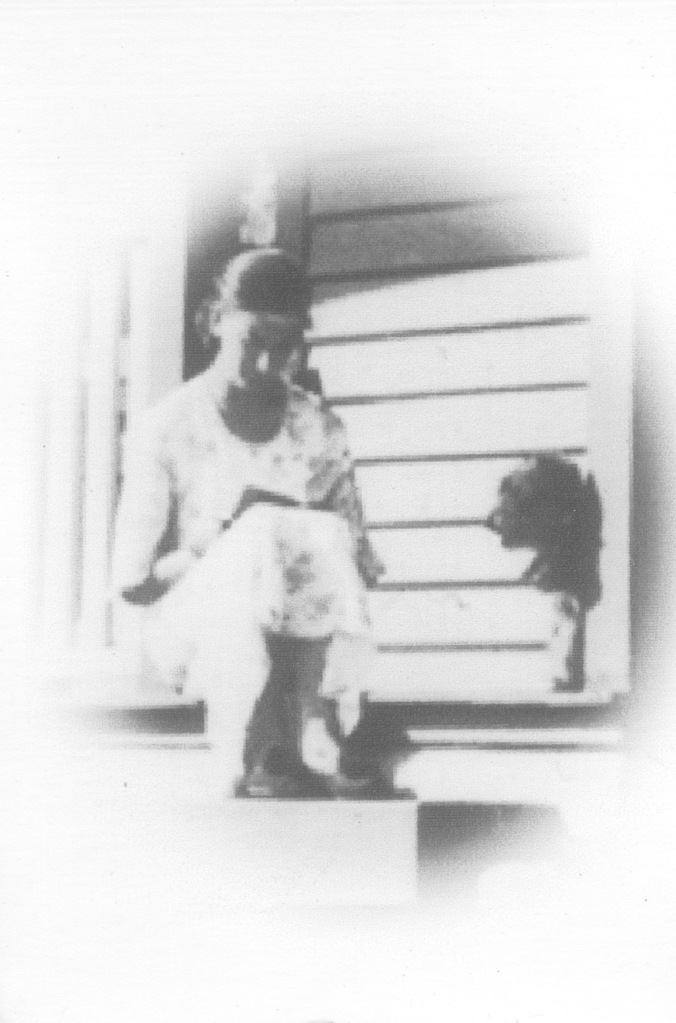 I have my gun.
This is a hefty wooden toy my father made, called an ak-ak gun, modelled on some weapon used in military combat out there on some other parallel to the north. My gun will be protection against the attacks of monstrous enemies, Japs with enormous grinning mouths filled with the teeth of sharks, as revealed in drawings and diagrams by my sisters. Germans in smooth helmets and big boots. These are the enemies from whom we will hide in the trench, safe and sound and wise and locked and barred and armed. To the teeth. I carry the gun as I move with my dog around the terrain.
We also had our gas masks. Importantly ugly, to be worn for vague reasons of safety and wonderful excitement in the reality of imaginary warfare. Khaki, grotesque, frightening, goggle eyes and an elephant’s trunk, is that really me inside there when I look into the looking glass? I had dresses of romantic floral silk, smocked in elaborate colours and patterns by my mother, grub roses, pink and green and blue, exquisite, and knitted cardigans, and my gas mask. I long for a long lost photograph of my hand-tinted self, portrait of child in silk dress and white socks and red shoes and regulation gas mask – long for it to turn up in somebody’s cellar, attic, kitchen drawer. And they scan it and send it to me as an attachment, saying hey look at you! Such things do happen. Someone once sent a picture of me as a little bridesmaid. And like sometimes in the busy street of some old Spanish city I have turned my head, just that split second too late to see Skete jiggling along beside a warm stone wall. Because she had nowhere to go, long long ago, she is still here there and everywhere, I only have to pay attention.
Pay attention to the moments between waking and sleep when the plumes of red sorrel under the pear trees conceal all but the quivering shadow of the dog, when perfect light-green plates of the nasturtium leaves, pebbled with drops of shivering water part and Skete is perfect again in the sunlight, and the petals of calendulas orange as the sun stick to the soles of my feet. I was in charge of Skete and she was in charge of me. She had a little rainbow rubber ball and she would jump up and catch it in her mouth and I could see that her teeth were very sharp indeed, very very sharp and strong and accurate, and her little jaw is not so little after all. And she sits at my feet in the firelight on winter nights, pretending to be asleep, and the permanent and perpetual wireless is on – London, blitz, Churchill, blackout – and I roll bandages for soldiers while my mother and my sisters knit strips with their white knitting cotton, or they knit balaclavas with their khaki wool, or mittens, or socks. It is most important that the soldiers’ feet should be kept warm and dry. Should it become necessary at any time we will proceed to the bomb shelter where there are blankets and candles and sand and water and matches and pillows and tins of condensed milk and corned beef and biscuits, as well as Fowler’s jars of fruit taken from the garden and preserved. Dark luscious raspberries bleeding in their own juice behind shiny glass.

There are charts about bombs and blackouts and gas masks, how to fit. Shouldn’t Skete have her own  gas mask? Nobody answers. Blitz, blackout.
The last time I ever visited the old house where Skete is buried, I stood in my bedroom in the time just after dusk and I heard her in the drive, running on the gravel, trailing her skinny lead, happy and purposeful and forever bright. She knew I was there. I suppose she also knew it was the last time, that there would be new people who might hear the little running footsteps and imagine they were the wind rustling in the creeper, the bowling and blowing of dry leaves on the pathway, the sound of nothing in the twilight.
Nothing in the twilight is a terrier who can catch a rainbow rubber ball in mid air in her teeth, or can kill a rat or a possum or a bandicoot. There was a story that long ago one of her ancestors had killed a thylacine. On a shelf in a cupboard in my great aunt’s house there was the bottom jaw of the thylacine to prove it. Nobody ever commented that the jaw in fact proved nothing, except that a thylacine had died. The story was that the dog had killed it, and although without the story the jaw was still amazing, with the story it was even better. Killed by a terrier just like Skete. Surely not. Amazing. It was a young small tiger, but still. People would look at the jaw and hold it heavy on the flat of their hand and stare at it and look at Skete and shake their head and say yes it was fantastic wasn’t it, that little dog. Somebody had fashioned a pin-cushion around the jawbone. The thylacine, they say, was that a dog, or a wolf, or a tiger, or what? A sort of wolf, maruspial wolf? Pin-cushion? History meets fantasy meets science in due course.
The lower jaw of the thylacine is dark, the colour of mahogany – why this is I don’t know – and it forms a curving hollow, rimmed with teeth, and into the hollow is set a high tight cushion, puffed up, covered in white bridal satin, stuck with pearl-handled pins and one long amber hatpin. There are dark spots on white at the end where the bottom jaw was once hinged to the skull. Where the satin meets the bone they have added a trimming of thick decorative lace, and have tied a bow, neat and finished. The tiger’s jawbone is a long long way from home, far from the wilderness, tucked away in its bridal finery in an old lady’s cabinet of curiosities where it shares a little world with a cowrie shell shiny and big, milk white spotted like a dream quoll or pardalote, milky blue around the rim, snugly housed in a hump-back tin, lined with burgundy velvet. Hold the cowrie to your ear and you will hear the sounds of the sighing sea, the woosh of the whaling ocean, the thunder of the waves, thoughts of the wandering moon. There is scrimshaw carved by sailors, images of tall ships, of mermaids, of fish and of strange birds, rippling waters and puffing winds. The nautilus is paper fragile, a whisper, and lies on a saucer, left in its natural state, wonderful enough to say, this is a nautilus shell, and people say, ah yes, a nautilus shell. It’s a nautilis shell.
But the curious marvel of the thylacine is not only that this one was killed by an ancestor of rainbow-ball Skete, but that the species has gone extinct, and extinct is a word with such a fatal ring that when you hold a piece of a thylacine in your hand, even if it has been turned into a pin-cushion, you feel the charge, the power of loss, of creation here today and gone tomorrow and never to return. Not for the thylacine the firmament of heaven, blinding flash of starry winking angels. Not for him the undulating waves of downy counterpane where dogs can play forever. The thylacine has gone in sorrow and in violence and in guilt and fantasy, and has lodged in its own special place of science and imagination and hope and an amazing bright tomorrow that I will look at shortly. Extinct animals join a special company, like a tragic ghostly zoo where they are all extinct together. The old thylacine that went in 1936, and the Florida dusky seaside sparrow, a recent one that went extinct in 1987. That’s another story about habitat, and the Kennedy Space Center, and the highway to Disney World. The Western Black Rhinoceros went in 2011. Then there is the very sad romantic history of Spix’s macaw, a blue parrot which is almost extinct. I have read statistics that give the numbers of species that go out of existence every day, but I can’t be sure how accurate they would be.